a plethora of cameras

post #77
The title of this post just now came to me.  Say it aloud and it has a kind of a, um, click to it.... It is true, however, that this week has had me trying to remember which camera did I take which photo with.  There's the new iPhone, which seems fantastic for anything stationary, even flowers.  I haven't cracked its people photos yet.  Not the same take as I am used to doing.  (note: my last cell phone was your basic "free"model.)

A week ago I finished up a card on my "old" camera, that first digital friend and patient teacher.  I thought I would miss its familiar touch when I traded up after giving this older camera to my newest grandbaby's parents.  I am feeling fickle: I don't miss my first Rebel at all. It's now their turn to learn on it while I get to work with the latest version of that same camera.
After only a week, I already love the Canon Rebel T3i.  It is light years advanced, so to speak. This includes my swooning for its instruction booklet, included in the purchase.  I can actually figure it out!  The presentation of the info makes sense!  For example, it gives clear page references where to go for additional info on a topic.  I always say it's worth whatever it takes to create clear communication with close companions, human or not.
Thanks, Steve, for your comment after last week's post.  It got me to mulling over that perennial question about whether having a camera handy leads to better photos or just more photos.  Better comes from practice, practice, practice, so, on that score, a good phone camera can work.  But I am not sure that handy provides the giving over of the self toward connecting with the image at hand.  Is the aspect of having instant options perhaps too seductive?  Is it simply that there's not enough control over light, angle, tone, composition?  And certainly I see a problem of steadiness, both in one's hands and in one's perception of the time a good photo takes.  Such moments for me hit the blessed zone-in factor, and I am grateful when it happens.


OK, some photos!  Can you discern the camera?

Next week, more photos with another camera, in the wet woods.  The discussion will continue.  I wish for each of you the chance to be an artist in the Appalachian spring.

Note added on Tuesday 3/27:  my college roommate just shared this poem by Greek poet Nikos Kazantzakis:   I said to the almond tree,/ speak to me of God./  And the almond tree blossomed.

on the road again

post #77
Since this is a weird winter with way less snow than usual in either Kentucky or New England, I decided to drive up to Massachusetts to visit family for a few days.  This is shocking news, but today, Sunday, it is supposed to get to 75 degrees here!  So, warm greetings from the northeast USA...

I even stopped in New York City on the way, driving in via the Holland Tunnel (which used to terrify me as a child!  All that water above us!!  Shiny pale yellow wall tiles flashing by forever!!)  I left in the dark that same day, taking the Whitestone Bridge route east.  The night was clear, the lights of the big city like multiple tiaras, and yet I didn't dare stop to look more intently for fear of never returning to that highway facing the direction in which I was then headed.
My photography there was mostly limited to a visit to the ICP (International Center of Photography.)  I went with my sister, and I am thrilled that I got to NYC while the exhibit I had been wanting to see was still up -- Greg Villet's photos of the family of Richard and Mildred Loving, who were married in D.C. but who couldn't live together where they wanted to, in Virginia, because, at the time, 1966-67, interracial marriages were still illegal in 16 states.   I've been interested both in how the photographer worked to get the photos and in the story they tell.  The Lovings were the ones who took their case all the way to the US Supreme Court.
I asked if the black and white prints on display were done by the photographer.  I was told that yes, they were, and the bent marks on most of them were the result of his having given them directly to the Lovings who treated them like the family photos they were -- a generosity now being shared with the rest of us.
Meanwhile there are new photo tools in my life.  By chance, my first smart phone ever comes at the same time as a camera upgrade and lens upgrade.  My first f2.8 lens!  A lot to learn, a lot to try out, a lot to see with.  Today I am sharing two iPhone photos, the first from home, last week, and the second from right-this-very-minute.

post #76
A young artist friend lives near Morgan County and was greatly affected by the 3/2/2012 tornado.  She and I met this fall because of our shared love of photography, so I asked her if I could use one of her photos on this blog.  She chose this one and included an explanation of it.  Thanks so much, Bobbie.

I feel like this one is the most powerful to me because you see so much of the destruction and you also see all the people coming together and checking on their community members. The demolished building on the left hand side of the pic closest to you was the building that the church across the road used for dinners.  My mom, dad and a few of our family members and I had gone there a few times to have dinner with the church members.... I am also making bracelets to sell and I'm giving all the proceeds from them to all those affected by the storms, the ones I've made so far say Morgan County and West Liberty on them and the beads are blue and gold which are our school colors....I went to school out in West Liberty all my life and this is the only way I can think to help my home town.

I also want to share some other tornado photos in the form of a slide show (click HERE) made by John Flavell, a longtime photo journalist and my friend, who showed up in West Liberty the same evening of the tornado.   He returned on Saturday, and again on Monday, as can be seen by the cover of snow over everything.  And perhaps other times as well.  Photos by the Lexington Herald-Leader are available at www.Kentucky.com, if you have time to search them out.  I know there has been a lot of coverage on TV, but both Bobbie and John are nearby.  Bobbie grew up in West Liberty, but currently lives in Elliott County, a mile from the Morgan County line.  (Around here that's how we give a sense of someone's place.)

our broken weather and the tornado in West Liberty, Kentucky

post #75
For those readers who know us, we are fine!  The tornado torn town being featured today on the Weather Channel is in the next county.  In fact, I happened to drive through there Thursday afternoon, on the way back from going with a friend, Jennifer Reis, to deliver some of her art to the Appalachian Artisan Center in Hindman. I didn't think to take any photos of the justice center being built or the mural whose artists Jennifer knows, or the corner white church where our family remembers seeing Colonel Sanders standing 34 years ago during the annual Sorghum Festival parade.  My regret.

Our phone company is located there; we hear their roof is gone.  However, we went without our long distance service and our internet connection for only 36 hours, obviously only a minor inconvenience compared to what people in West Liberty have lost.  My friend John Flavell, now a freelance journalist, whose funeral photos and waterfall-in-ice photos I have shared on earlier posts, went there right away Friday evening to make the photos for the Lexington Herald-Leader Saturday and today.  Amazing, John!
I did take some photos yesterday, in Lexington, at the annual Kentucky Crafted: The Market which is celebrating its 30th year this weekend!  My views are simply a small snapshot collection from a large and wonderful gathering of 220 juried artists, mostly from Kentucky.  I admire their tenacity and hope.  I could never manage to spend four days in a booth, with no windows, in a hall filled with art of all kinds that I wouldn't have time to see.  Carry me out on a stretcher!  But it is a bright feather in the cap of the Kentucky Arts Council, and one of the highest rated such shows in the nation. 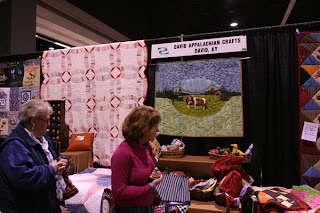 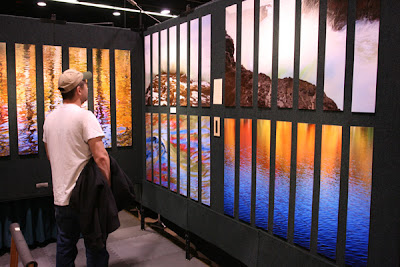 As for my posting about Mike Mullins, it seems many, many people read it, and I thank you for the word of mouth (or link) that made that possible.  I am glad I could be part of what I know will be a long and ongoing tribute to a fine person and his invaluable legacy.  It takes a while to process sudden changes in the path our lives take, and I'm grateful each time this weight can be spread among those involved.  In that same spirit, I know we all hold those affected by these tornadoes in our hearts and minds as well, especially in the coming weeks.
Posted by Ann No comments: Links to this post