post #126
This blog's intent has been to talk about photography and about Appalachia.  I try to keep each week's post fairly simple, mostly short, and always fun, at least for me.  Along the way I share my photos, including ones that are not perfect.  If they tell part of the story I have in mind, I go ahead and use them.  I am not trying to show off.  I much prefer to share -- and to learn from whatever I do.  For these same reasons I have appreciated occasionally including work from other photographers, such as John Flavell and Chris Garris and who knows who in the future.  I also include my own work from other places where I may happen to be.  The line John Lennon used in a song, "Life is what happens to you while you're busy making other plans," works for me as well.
Today's photos are a combination of where I have been (England) and where I want to go again (the beavers nearby).  Therefore they are not the whole story -- one's a finishing up and the other's a hint of more to come.

First, the snow at night, in England, coming back from a Chinese New Year potluck!  Surprise!  We ended up with five inches, but it didn't last all that long. 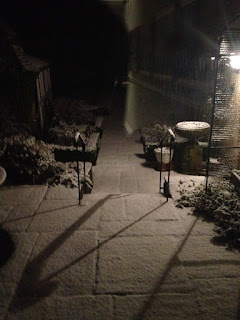 Here is the same place, the next morning: 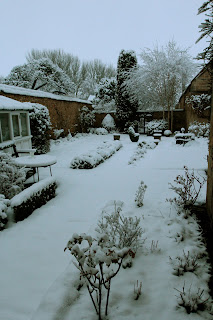 In fact, the next day I drove to a garage that was at a lower elevation, and there was a lot less snow around:


I don't know which of these two views I prefer, so here are both of them! 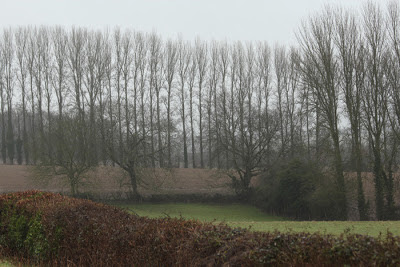 Now, back in Kentucky, where the snow seems more persistent.  I had to slip and slide a bit to get the angle I wanted to show the water falling AND the unusual snow circle below. 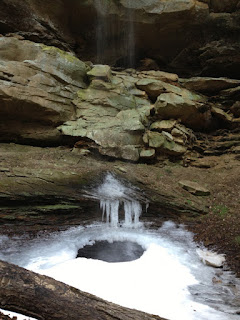 I am on the way to check out "our" beaver colony.  The waterfall, the stream edge and the chimney are all en route.  The pile of rocks shows the back of a chimney built by homesteaders years and years ago.  In the early spring, it is beautiful, surrounded by daffodils. 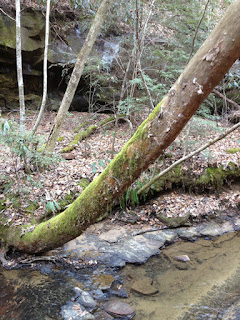 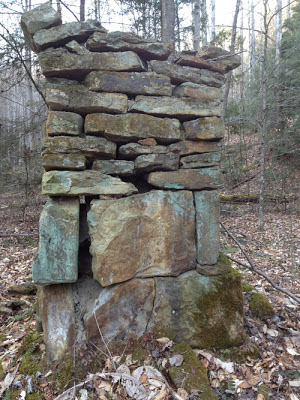 Getting to the beaver area requires several stream crossings.  I finally began to see clues.  I call this a beaver cupcake -- even the bark is gone -- and the tree that used to be on top was nowhere to be seen.  It is a marvel, really, despite the aura of destruction along the stream. 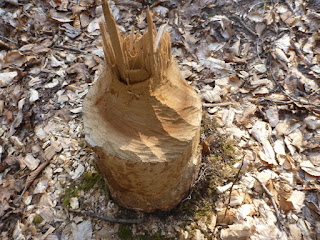 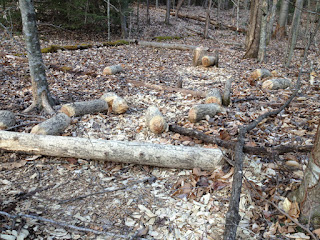 How about some beaver chips for dinner....  Again, notice the missing bark on the lower part of the stump.  When I return to this place, I will look to see if this tree remains standing -- though I doubt it will be. 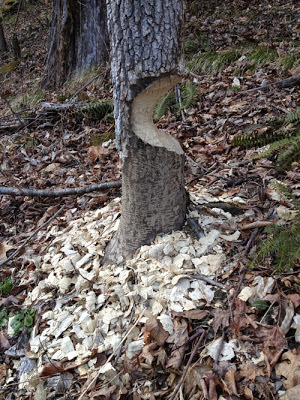 My true confession for that day is that I did not have my good camera with me!  Neither did I have food or water.  I had just planned a "look see".....  But now I am eager to return better prepared.  (Even truer confession: most of the beaver photos were taken with my iPhone.)
Posted by Ann 1 comment: Links to this post

post #125
I have recently returned from England, where the weather was, well, just like Kentucky -- except they've had rain and wet since April so they are way soggier.  And complaining that enough is enough!  Anyway, I will start with non-snow photos and then go to the later-in-the-week snow show.  Last week I explained why I was there and shared a few photos.

IN THE GREENHOUSE, IN THE GARDEN: 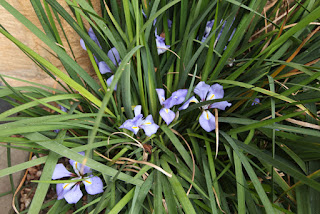 SNOWDROPS, as in early spring flowers.... 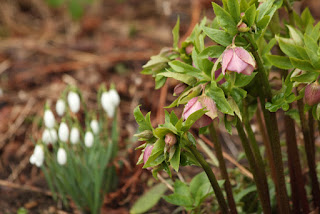 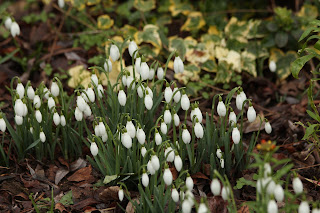 IN THE TOWN, ON HIGH STREET:


FROM INSIDE, THEN OUTSIDE, THE SAME WINDOW: 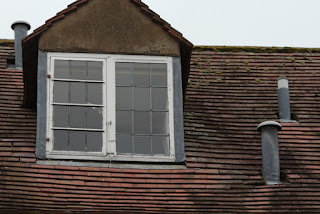 OTHER WINDOWS, from the inside: 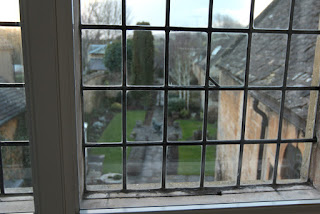 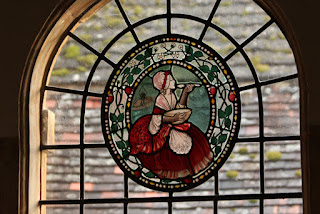 AND THEN, EARLY ONE MORNING, SNOW DROPS OUT THE FRONT DOOR:
(Remember to enjoy vertical shots to go with the horizontals....) 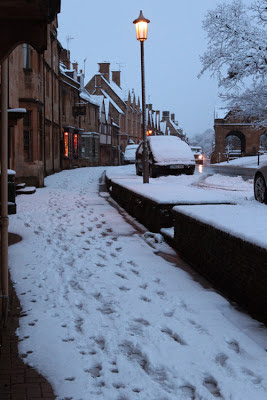 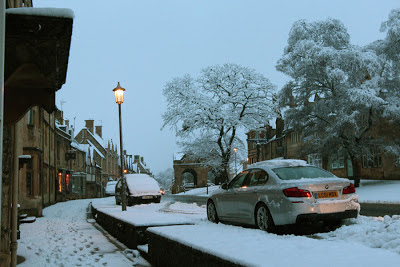 ON THE ROAD, going very slowly up a hill...and, later, SAFELY BACK IN THE GARDEN: 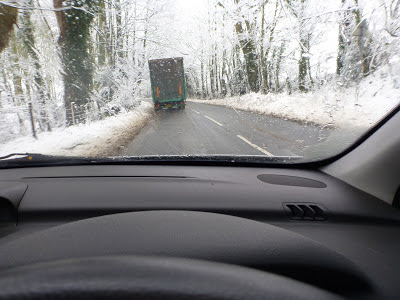 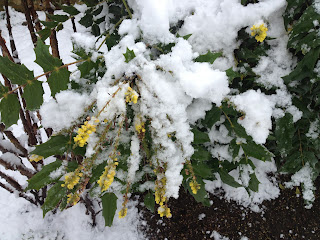 TWO VIEWS OF "MY" TREE, REVISITED:

SHEEP IN THE SNOW NEAR "MY" TREE, AND BOTTLES, TOO: 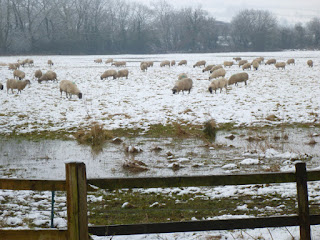 MILK DELIVERY, REVISITED  -- I happened to be taking my tree photos when the milk delivery guy came by.  I thought I was polite in asking him if I could take his photo, but for some reason, he didn't like the idea at all and rushed off.  I can only imagine he was wary about something or maybe I just took him by surprise.  My apologies.  I was just so excited that I had happened to stop just before his little truck pulled up!  So this photo, about that which is left behind, will end this show today, with one brief word of unneeded advice: "Don't keep your curiosity bottled up."

post #124
Today is unusual because I don't usually compare countries.  However, let me just record that if anyone here complains about the dusting of snow that might happen, I will laugh out loud.  The USA is clearly bigger and badder as far as snowfall goes, especially this weekend.  This afternoon here is gray and raining.
As promised last week, I have managed to snatch the time for a few new photos .  The images are fairly random, so I decided I would share them in pairs, this week and next.  Think of these photos as stanzas in a poem.  (No one made any requests, so random is what you get!) 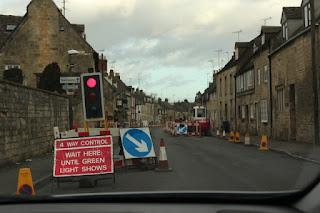 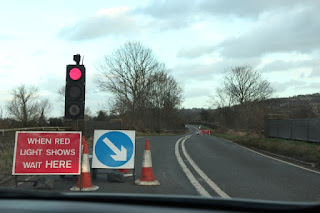 These road shots are an easy pair to recognize -- a town view and a country view.  I am in the car, driving, the steering wheel on the right, my car on the left hand side of the road.  So far I am still alive!   And I have been driving every day.  Except for the motorways, the roads all feel pretty narrow even without construction or repairs to maneuver around. 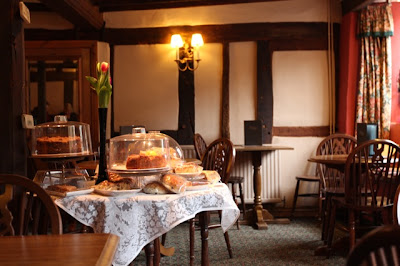 I did take some time to go the Badger Tea House down the street.  I hit a quiet time.  There were two women sitting in front of the fire, however, which is why you see only the side of the fireplace in the second photo -- which actually is a photo of the old and loyal dog, on the stairs.  I believe the family who run the place live upstairs.


For today, I am ending with two favorites.  Trees on this island nation are indeed endlessly fascinating.  I saw this one and its sheep companions while stopped by the side of the road because of a serious accident ahead of me.  I have seen this tree several more times, but that day the light was so much better than subsequent days.  I have a few more chances to catch it in even better light, so perhaps I can share another version of this photo next week after I get home.

I made a special stop along the road to take this photo.  The sun had been cutting through the clouds for awhile, and I just had to try for it.  Again, the landscape doesn't always look like this, so I am grateful to be able to share it today.
The images for next week do include some more traditional aspects, as they say.  Thanks as always for visiting with me, this time while I am also visiting!

post #123
Greetings from England.  Yes, England!  Otherwise known as Great Britain or the United Kingdom (UK).... Not the best time to be here, weatherwise, but I am in a lovely part of the country - about two hours northwest of London, in the Cotswolds.  This is where my stepmother lives.  She is British.  I have come for 10 days to help her after a bit of surgery.  I have never lived here but have visited many times over a long period of time.
Because I just arrived yesterday, I had the idea that the photos I would show today would be from earlier visits here  -- to set the scene.  Then next Sunday's post will be what I can see of interest during this week.  I am hoping it snows here again, since snow is unusual.  But "they" say it might happen.  (London is way farther north than where I live in Kentucky -- where it is snowing at the time I'm writing -- but this nation is surrounded by water that includes some warm currents.  It makes for wonderful gardens all year long.  All that said, Scotland in the north gets what I'd call regular winter weather.)


If anyone has something they are curious about here, let me know and maybe I can take a photo of it this week and post it next Sunday.  Thanks!  Now, one last one for today: