Now it's New Year's Eve, and time to think of spring!

post #367
Have been having a delightful day, despite the COLD outside. I hope everyone has some warm place to be. And I mean everyone.
Last week's post was in the present, so it's time to have the third look back into 2017. This means spring -- April, May and June. Some of these images are favorites of mine, most of which are repeats. I try to put my best on this blog when I have them, but I seem to be most interested in story and how the photos reach out to each other.
Growing up in Connecticut, I loved winter the best. Since moving to my beloved Kentucky, I'm all over spring. It charms, it renews the earth, and there is beauty in every crevice and creek.

Even though I have sort of been going backwards in time during this on-going review, in the following photos I'm mixing up the Aprils, Mays and Junes ....


Here's to beauty, poetry, music, theater, and such in the new year. And community. It has been a solace for me to gather up these photos today to share on this blog. They are all made in eastern Kentucky.  Thanks on this New Year's Eve for the support for my work that many of you have provided. Let's all persist in our dreams this coming year.
Posted by Ann No comments: Links to this post

post #366
It's a blog day but it's also Christmas eve day! I will be able to do the main parts of this post right now, but I can sense that I will want to tweak it in a day or two, after there's a bit less on the schedule. I hope everyone everywhere is having a good day today, whether or not Christmas is part of it. The weather report for eastern Kentucky is giving a covering of snow during the night. We haven't had any of the white stuff yet to speak of, and there's not anything in the close future, so tonight's bit will be much anticipated and appreciated.
Some current events, some Christmas photos from recent years, and mostly greetings during this major holiday time.

First, happy news about George Ella and Steve whose son, Joey, and his wife, Whitney, presented to the world a baby girl, the first grandchild for both their families!! I took this photo of George Ella this month during our writers group meeting and Christmas meal; she has been smiling an amazing amount this month, even more than usual. 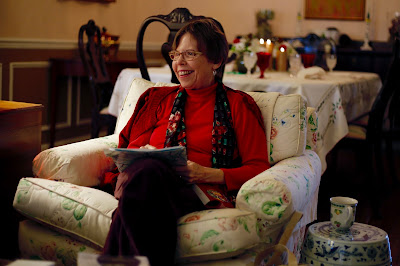 Now two Christmas tree photos, one from 2016 and the second, rediscovered, from 2013! (I never before realized what a fun photo it actually is.)

Next: one patient grandaughter while I have my monthly hair cut. I believe the phone rang and Jenn had to go answer it. What else is a photographer supposed to do with that time? She looks so poised to me, and she's only 6. 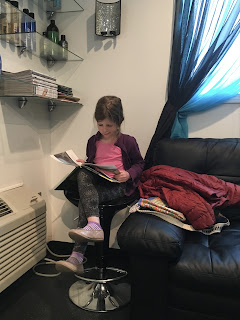 Then here's the most current of events: the 42 year old fridge, the one we used and defrosted all that time, has been replaced!! Here the old has made it outside to the deck. Eventually it will be moved to the barn for seed storage or something (after the door is made safe.) Please notice the lower yellow bumper sticker on the right side. I'd say it's hysterical to find it there, hidden all these years by the wall it was next to, but actually it's historical!! 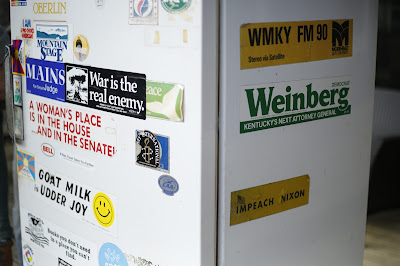 Note: I will be hoping that our dysfunctional president can at least show a modicum of Christmas spirit for even a few days and desist from public bullying of people who don't please him. There are real problems in the world, like over a million sick with cholera in Yemen, and our fellow citizens in Puerto Rico still not having electricity after 3 months, etc. Some compassion and genuine leadership would serve us all well. It has to do with learning about seeking the truth and trusting the journey that takes us on.
Don't you think this is good time of year to tell someone you love about something you love, before year's end?
Posted by Ann 1 comment: Links to this post

post #365
It's my pleasure to be thinking of summer, for two reasons. One is that it is cold out, and the trees are bare. There's even a coating of thin ice on my small pond. The other reason, however, is that I am reminded of the wonderful tradition that is our COUSIN CAMP and other such times when it's warm and friends are out and about. So, this "every other week, end of year quick review" idea of mine continues. Working backward through 2017 (see post #363), here are some favorite photos from June, July and August. These are not necessarily celebrating an artist's essential alone time. Instead these times provide important balance to that inclination to be alone and working all the time.

Sorry, I can't help adding that I am appalled that our government is about to pass a terrible tax bill that will help our elected officials a whole lot but not most of us. And Trump won't even share his tax returns with us. It feels like a hasty, shady, desperate robbery in broad daylight, a behind closed doors bully effort, especially because it will even damage the Affordable Health Care Act at the same time. OK, no more words from me for now. But let's not ever forget, as if we could. 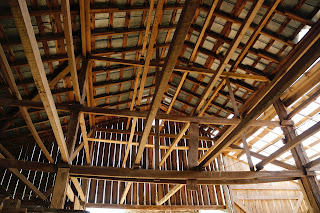 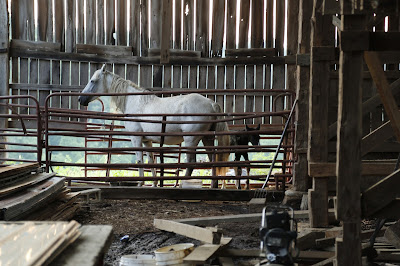 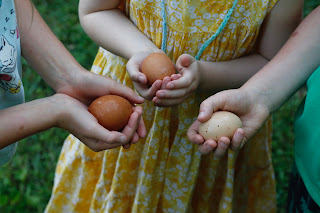 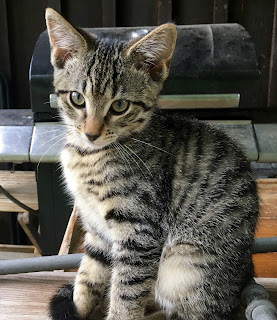 The Cousin Camp usually happens in July. Two June photos are next: 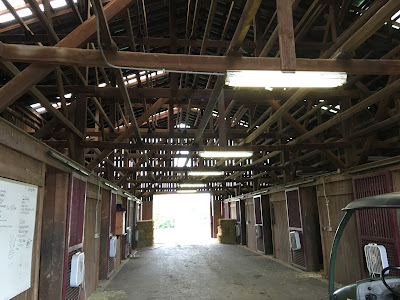 post #364
Last week's post was about alone time photos, from the last few months. This week it's Thanksgiving in Colorado with my son and family. Next week -- alone time photos, from this summer, just in time for Christmas....
I want to note, however, that I am writing this from Morehead. The roads were too terrible last night for me to make it all the way home from a day in Lexington. Thank you, Tom and Molly!!!!
Now on to Denver and family and Thanksgiving:

Denver's light rail system took the two kids and me downtown to meet up with Eric for lunch. 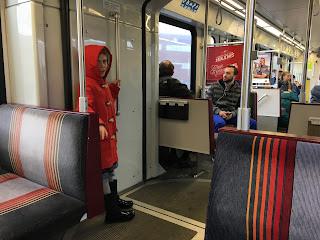 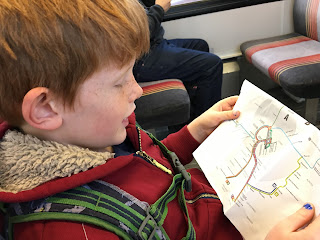 Two views from their office, all on the 12th floor of the new office/hotel building -- see the stadium! 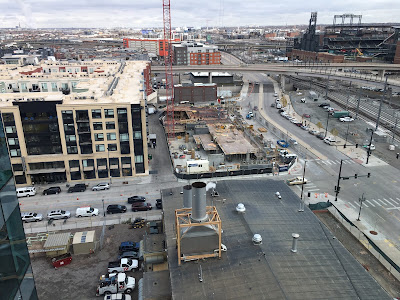 Then Thanksgiving, in the mountains near Denver: 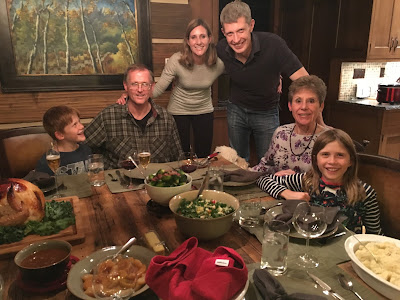 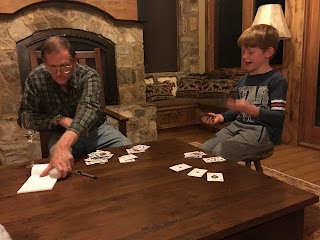 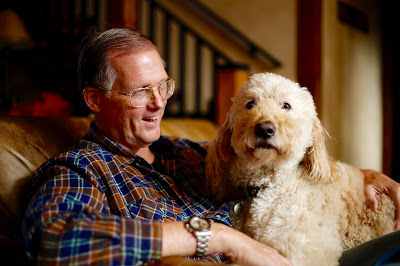 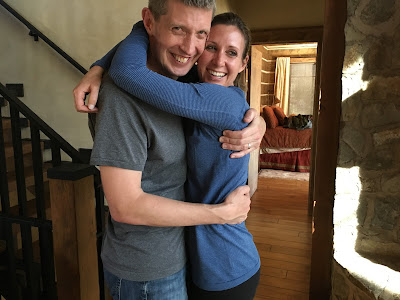 NOT lots of snow, but all of us did get out for a walk and a session of "skipping snowballs over ice:"


I'm very thankful, as always, for my family and for having time together. This may sound obvious and trite, but it is monumentally true.
Posted by Ann 3 comments: Links to this post

most any kind of artist needs alone time

post #363
I realized this morning that this would be the first day in two weeks when I am entirely alone! For the "happy hermit" I often am, that's a big deal. In any case, I thought I would honor the thought and the reality by gathering up some photos I have taken BECAUSE I was alone. Today I found 10 from just the last 3 months. Since I never want to take all my readers' time, this for me is enough photos for one post. I've now decided to do the other 2017 months two by two, every two weeks, with my Thanksgiving trip and other such fun "out in the world" experiences in between.
That's the reality of my life, actually. I'm a very fortunate person to still be doing my photography, to be learning from it all the time, and to be grateful that I enjoy my own company, especially when I am working with my camera. As is often said, a certain amount of time alone is essential for most kinds of creative work.
I can tell when I'm "in the zone." That's where I call it, anyway. It's esssential. It's not called loneliness; instead it's called working or creativity or pure dumb luck.

Most artists and writers prefer to work alone so they can draw, paint, sculpt, or write from their heart, that place of flow where the unconscious plays freely.  (common statement)


I even zone out when I do these posts on this blog. Sometimes I think I enjoy making my posts just because it invariably provides zone out time. Well, I also do enjoy just sharing my photos. All the same time, I'm appalled that the EPA and its minions can think we need less access to nature, and that they have no concern for preserving clear water, etc.  Even though I am an artist, I don't want to zone out so much that I forget my outrage and disappointment at the scams currently being hoisted on our nation by short-sighted greed  -- edging out goodness and common sense for the time being, like a stinky fog over the land.