Milkweed (5th time in these posts), and some recent favorite photos

post #161
More milkweed to share, and I continue to find all the changes fascinating.   There sure aren't very many milkweed plants around to follow.  I am fortunate to have had three different sites to photograph.  The first photo shows more seeds and pods, at the roadside site (#3). 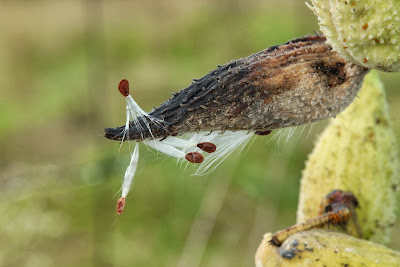 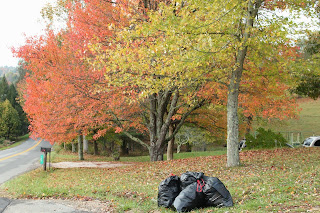 This shows the church 180 degrees behind me: 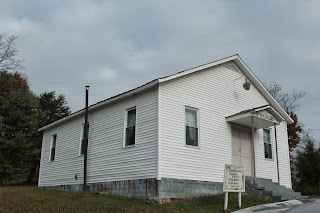 Doing a blog means that there are some statistics kept about how many hits one gets, and which countries are giving these hits.  I have noticed recently that, after two years, I am getting a lot of hits for my sorghum molasses photos!  I have no idea why, but of course I am curious about who is interested.  Sometimes it is my tobacco photos that generate activity.  For both sorghum and tobacco, I have given an idea of the process of how each is done, but the information is not designed to be comprehensive.  It is just me sharing what is going on around here.  (For a long while, my Indonesian photos were a draw.)  I am mentioning this because I do hope what info I end up giving is accurate and helpful and, well, artful and interesting.  Each place on earth has its fascinations.
Posted by Ann No comments: Links to this post

post #160
Last week I showed a lot of cliffs from our late afternoon boat ride a week ago.  Today I want to share more views from our Jon boat, including more cliffs.  Again, most of the time we were moving, though often slowly, or, occasionally, idling.  The sun came out as we were returning to the boat landing area, which means that the light primarily came from an overcast sky.  We aren't able to go on the lake very often, yet I find so much to look at while there, and I really enjoy it when the whole lake is this peaceful. 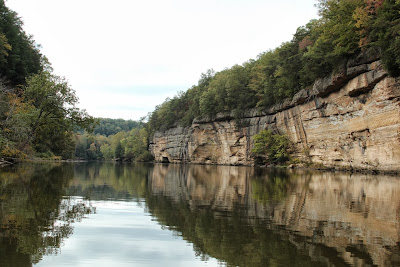 With these next three photos I hope to give the feeling we had passing along this cliff : 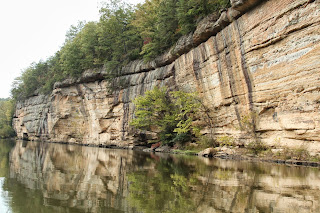 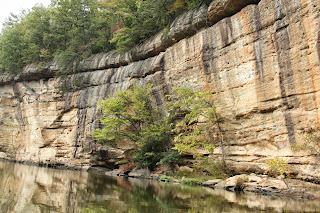 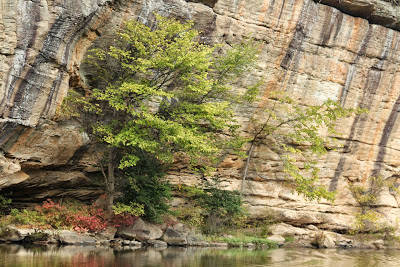 Then, by the time we returned to this spot, the sun was out.  Here is another way to see the tree area of this cliff.  To me, the sun and shadows create a very different feel: 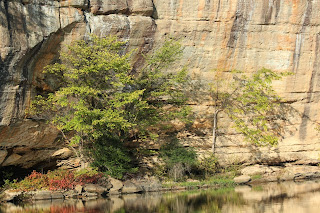 There were hardly any other boats where we were.  We saw this lone fisherman twice and spoke to him once...: 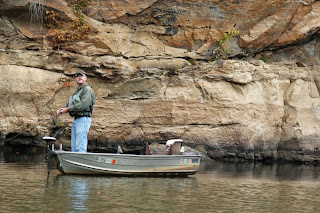 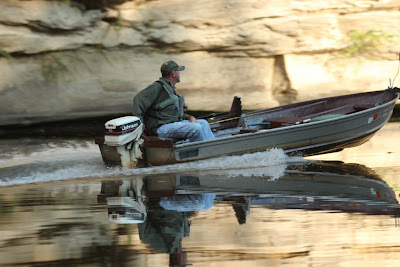 Balancing acts are not hard to find, such as this one: 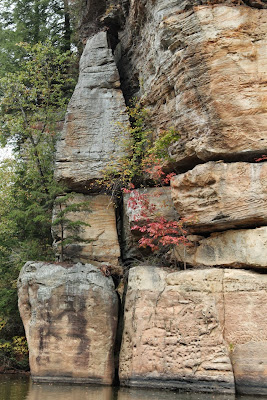 But a few of these acts seem particularly precarious (!!), such as:


The water itself can be beautiful, too, of course, 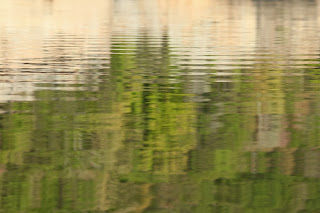 and our memories of earlier visits help us to figure out what is what.  This once was a beaver entrance, because we saw beavers.  Now it may be an entrance for some other creature: 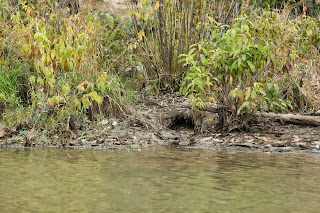 I will finish today with two sky photos since it wasn't just light colored clouds during the two hours we were out there: 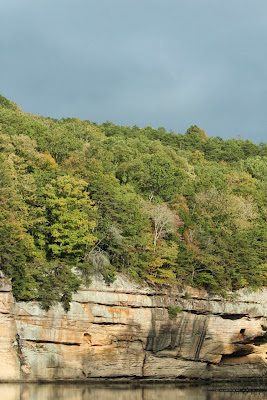 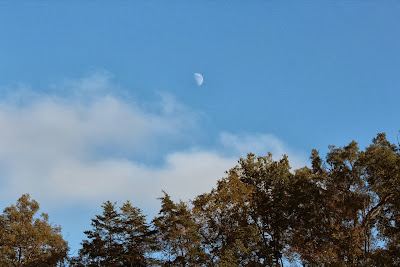 We did see one heron, but I didn't get a good enough photo, and we saw kingfishers.  My shoreline plant photos didn't do as well this time either.  However, I was able to take more cliff photos than usual because of the light provied by an overcast sky.
Today I have enjoyed sharing the time we had in the place where we were....


.
Posted by Ann No comments: Links to this post

I have always known about the connection between monarch butterflies and milkweed. I have referred to it during my three earlier posts about the plant but I haven't focused on it.  However, today, on line in the New York Times, I read this piece which is very succinct, very clear, very distressing.  So I begin today's post with the link to it.  Actually, this editorial is short enough for me to put it into the blog itself.  Right here:

Monarchs Fight for Their Lives

The more you know about monarch butterflies, the more extraordinary they seem. Their life cycle — the adaptive web of behaviors they have evolved — is almost unbelievably complex. They migrate en masse (this month, as a rule) from all across the Midwest and Northeast to just a few high altitude sites in Mexico, where they winter, sheltering in profusion beneath a canopy of fir trees, from whose trunks they draw the residual heat they need to stay alive. Winter past, they migrate thousands of miles northward, where they lay their eggs on milkweed plants, the only plant a monarch caterpillar can eat.

The complexity of their life cycle is mirrored by the complexity of the threats they face. For the past 15 years, scientists have been watching monarch numbers plummet, as much as 81 percent between 1999 and 2010. They reached nearly catastrophic lows in the winter of 2009-2010 and have barely recovered since.
One recent study suggests that the long-term survival of the species may be in doubt. A few weeks ago, one of the scientists devoted to studying monarchs, Ernest Williams at Hamilton College, summarized for me the threats that have been reported in recent studies.
Nearly every link in the monarchs’ chain of being, he said, is at risk. Illegal logging in Mexico has reduced their winter habitat — an already vanishingly small area, which is itself being altered by the warming climate. Ecotourists who come to witness the congregation of so many butterflies disturb the creatures they have come to see. But perhaps most damaging is the demise of milkweed.
Monarchs have the misfortune to rely exclusively on a plant that farmers all across the Midwest and Northeast consider a weed. There is a direct parallel between the demise of milkweeds — killed by the herbicide glyphosate, which is sprayed by the millions of gallons on fields where genetically modified crops are growing — and the steady drop in monarch numbers.
To anyone who has grown up in the Midwest, the result seems very strange. After decades of trying to eradicate milkweed, gardeners are being encouraged to plant it in their gardens, and townships and counties are being asked to let it thrive in the roadside ditches. What looks like agricultural success, purging bean and corn fields of milkweed (among other weeds), turns out to be butterfly disaster. This is the great puzzle of species conservation — it has to be effective at nearly every stage of a species’ life cycle. And this, too, is the dilemma of human behavior. We live in a world of unintended consequences of our own making, which can never be easily undone.[Italics are mine.]

I have not been following the milkweeds this summer and fall because of the monarchs.  It has been purely because of the book George Ella Lyon and I are still working on.  It has turned out, however, to be a great big discovery adventure.  And what a bonus if my curiousity and art also help create awareness for how each plant, each creature, and each of us is part of a whole world.

My plan today had been to share some of the photos from yesterday's peaceful two hours on nearby Grayson Lake in our Jon boat, with its flat bottom and a fairly quiet trolling motor.  Even though it was a Saturday late afternoon and good weather, we were practically by ourselves the whole time.  The overcast sky made for better light for most of my photos.  My husband ran the ship -- slowing down from our 3 m.p.h. speed at every request.  Thanks! Even so, most photos were taken from a moving boat. (I didn't say speeding. Just moving!)  The lake is a Corps of Engineers build; it highlights the sandstone cliffs that are everywhere around this region. 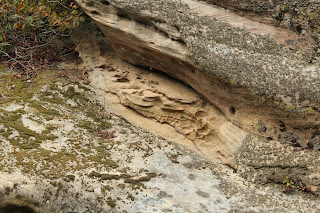 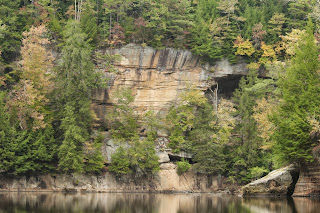 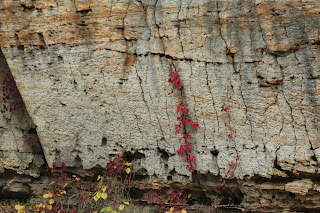 There are way too many photos for one post, so I will continue this trip next Sunday.  The next wave, so to speak.  I leave you with two last photos and two thoughts:

finally, some fluff -- on the milkweed

post #158
This month is the beginning of my fourth year posting weekly on this blog.  Wow!  It's still fun to do, so I look forward to everything I can't imagine yet that will show up here in the future. In honor of the occasion, I plan to post a review of a few of my all time favorite photos.  I can't start that today, however.  I'm too impatient to share some very recent images made last week.

The overall scene I was working in: 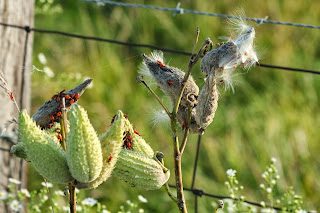 Busy milkweed bugs, bigger and badder than when they were younger and without markings -- doing vital work?  It looks to me like the milkweed pod has finally opened up or is it being opened up by the bugs? 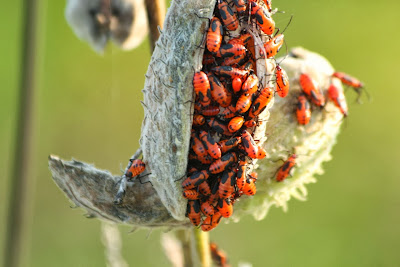 The reason I wonder is because this next pod has split open and the the seeds are sitting there neatly folded together before the wind blows them out and about.  But no bugs. 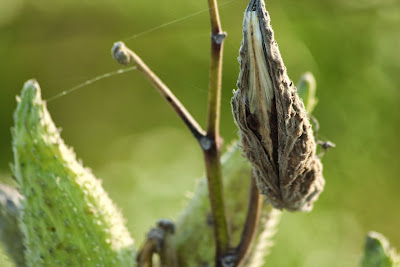 The next picture is kind of a miracle.  I was on my way to town, after all, with not much extra time to get where I was headed.  This particular group of milkweeds is on the way, and there is now place to pull off of the road nearby.  I had been gone five days so I stopped to check out the scene.  It was 6 pm with full sun on the plants, usually not a good light for a photo.  However, when I looked more closely, I saw a grasshopper on the one pod that was open -- with seeds starting on their way.  After the frog and the spider visitations earlier in the milkweed evolution, I was literally disbelieving that I was now seeing still another visitation.   And within the only few minutes I had.  I did realize I needed to stop thinking and just make a photo in a hurry before the grasshopper moved on, the seeds blew away if a car came by, or the light changed.  Hand held camera.  Holding my breath. 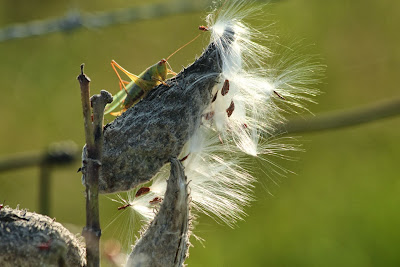 The remaining photos are more of what I saw when I returned the next morning around 8:30, with an overcast sky. I didn't get any other good grasshoppers shots on day 1; my focus on that moving target was off.  It happens.

ONE LAST NOTE: I now have seen the actual book I wrote about last week!  The cover looks even better than I could have hoped.  Nice!  Great job, Counterpoint Press. Bravo!